If the World Wildlife Fund (WWF) were to take a look at the Polish language to check how animals are treated, then what would they learn about how Poles treat fish?

Do the fish have suitable living conditions?

But of course, it’s the quantity and quality of water that matters. Take for instance the Polish idiom jak śledzie w beczce, which means to be packed into a tiny space…like sardines! This doesn’t suggest that śledź (herring) enjoy good living conditions. When such a popular Polish fish is treated in this way, this doesn’t look good for the rest.

Then there’s na bezrybiu i rak ryba (in a no-fish environment, a crayfish is a fish) which means something along the lines of beggars can’t be choosers. It’s a short expression, but when I first saw it, I couldn’t work out its meaning. The problem word was bezrybie because I couldn’t conceive of a no-fish environment, or more precisely, I couldn’t conceive that a language would have a word for this. If English tried to come up with one word to translate bezrybie, then the best I can think of is fishlessness:

Under fishlessness, a crayfish is a fish

Sounds poetic, but makes no sense.

Anyway, what worried me, and what might concern the WWF, is the fact that Polish has a word for the absence of fish. This suggests that such situation arises in Poland. If fishlessness exists as a concept, then it doesn’t bode well for the fish!

The idiom gruba ryba suggests that some fish are doing well. But like the English equivalent, ‘to be a big fish in a small pond’, gruba ryba implies that the smaller fish aren’t so well off. Indeed, they’re probably harassed and exploited by the fatter, meaner fish, or even by rekiny biznesu!

When I first came across the expression: dzieci i ryby głosu nie mają, I assumed that ‘głos‘ referred to the right to vote. Kids and fish don’t get a vote – whether in family decisions nor in elections – which means that Polish fish don’t enjoy the full rights as citizens. It’s just as well that they don’t pay taxes otherwise we might face a revolt!

I later learned that this proverb doesn’t refer to voting at all. It means that children and fish don’t have a voice, i.e. parents say this to teach the kids to stay quiet. As we say in English, a child should be seen and not heard.

Polish fish are held up as examples of obedience and passivity. So the WWF might conclude that if fish want to win the right to vote, they’re going to have to speak up!

Are the fish in good health?

In English, to describe someone who drinks a lot of alcohol, we say that he or she drinks like a fish. This is a bit hard on fish who, if they drink at all, only drink water. As far as I’m aware, Polish fish don’t have a drink problem. Indeed, it seems that they are particularly healthy as Poles say zdrów jak ryba (as healthy as a fish) to describe someone who is in very good health.

So the WWF would give top marks here…but maybe they should take a second look?

Poles also say ryba psuje się od głowy (fish rot from the head down), to describe a situation in which an organization decays from its leadership down. Why did the Polish language choose fish for this particular idiom? Is rotting fish a common sight?

Wherever this comes from, it doesn’t sound like fish have good leadership. Not only are they poor communicators, but they’re a rotten bunch too. With this quality of leadership, I can’t see fish getting the right to vote any time soon. 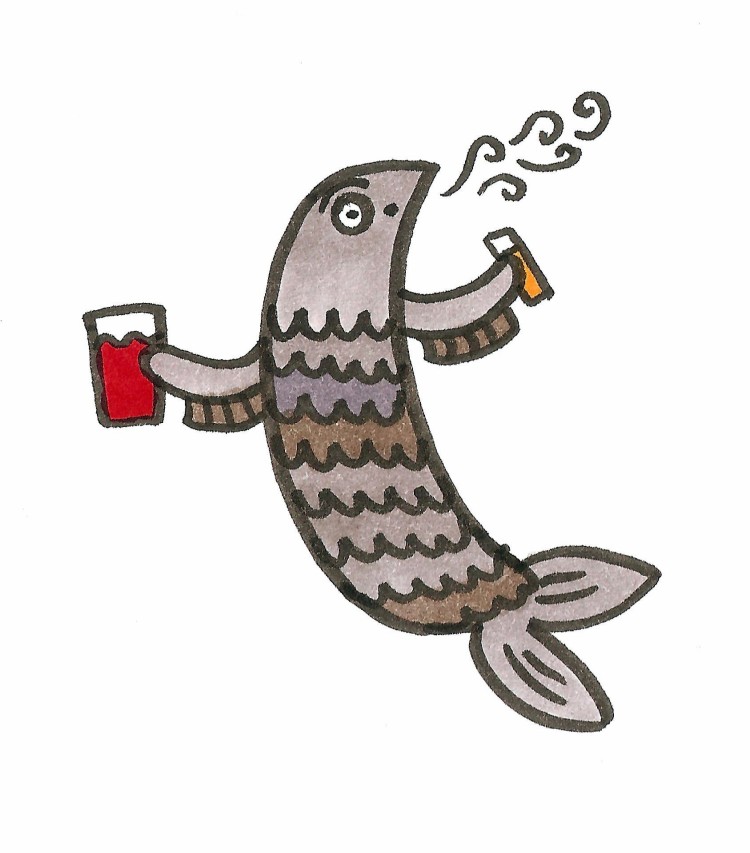 If WWF really want to run a case study on fish, then they should attend Christmas in Poland.

Like most foreigners, I was intrigued to learn what Poles eat for Christmas dinner. I wasn’t surprised that Poles eat fish, it’s just that I expected it to be a more upmarket fish like salmon or trout. But carp?

You see, I was once in Łazienki Park in Warsaw where there is a large pond full of carp. Leaning over the balustrade of a bridge, I could see the large dark masses of the carp as they swam back and forth. Beneath me I noticed a cigarette butt floating on the water. All of a sudden, a huge carp emerged from the brown water with its mouth open and swallowed it.

Do Polish fish smoke? Well, I’ve never looked inside a wędzarnia (smokehouse), so I don’t know whether the salmon are smoked or smoking. But in the case of carp, it does seems they enjoy a wee puff now and then!

Of course, the next big surprise for a foreigner is the first time they see a carp in the bathtub. While it’s a practical solution, and after my experiences in Łazienki Park, I was glad the carp was clean…but it is kind of weird.

So I was uncertain how carp would taste or if I even wanted to try it. But in actual fact, the carp was quite tasty. The problem was with all those bones. Carp must be the boniest fish in the history of marine life. It takes five minutes just to remove the bones from a forkful of carp before it’s safe to eat.

I was intrigued to learn that the Polish language has a separate word for a fish’s bones. In English, all animals, birds and fish just have regular bones, but in Polish the bones in fish are called ość instead of kość.

I assume the reason for this is that when you have a carp bone stuck in the your throat, you can’t pronounce the letter k and can only croak ość, ość as you point frantically down your mouth.

So what would the WWF make of the fact that Polish has a separate word for fish bone? It does suggest that fish are often seen in Poland without their skin – not good news for the fish!

So what conclusion would the World Wildlife Fund come to after their fish audit of the Polish language?

Well, the fish seem to be in good health, though an anti-smoking campaign might be necessary. Living conditions are mostly fine, but there’s room for improvement with śledź and carp. And finally, the lack of good local leadership is worrying.

The WWF would probably conclude that more attention is required because, as we say in English, it does look a bit fishy.

4 thoughts on “The Fish Audit”