Naively I assumed that learning Polish words for family members would be straightforward, just a question of substituting English terms for Polish ones. A family is just a family, right?

Question#1: How do Poles perceive their in-laws?

In English, the family that you marry into are your in-laws, and to define the relationship, you simply add the suffix -in-law to mother, father, brother, sister etc.

I once had the following conversation with a Pole who got confused by the pronunciation of the word ‘law’:

Pole: I always thought it was ‘in-love’.

Me: Nope, it’s primarily a legal relationship. Love is secondary.

But on second thoughts, in-love might be a better suffix? After all, it’s because I love her daughter that she became my mother-in-law in the first place! Maybe mother-through-love would be the best version!

I was surprised to discovered that’s there was no Polish suffix for describing in-laws. What I can’t just say siostra prawna or ojciec prawny? Teść, teściowa, szwagier, szwagierka…all these new words to learn, that’s extra effort!

This made me wonder how Poles view their in-laws.

How do Poles perceive szwagier and szwagierka? Is it like getting a new brother or sister?

Question#2 – Do I need to learn these words for maternal and paternal relatives?

Sometimes I trick myself by thinking that words that look the same have similar meanings. So my first thought was that the word stryj was connected to strych (attic). So maybe wujek is your normal uncle, while stryj describes the crazy uncle who lives in the attic?

I learned that the Polish language has two words for uncle – wuj/wujek (on your mother’s side) and stryj/stryjek (on your father’s side) – and it was the same with aunts, nieces and nephews.

For a moment I despaired. Do I really need to learn all of these words?

Question#3: Are the stryj’s dying out?

I’ve heard or read the word wujek thousands of times, but only once came across the word stryj. Is it still used? Is the term dying out and being replaced by wujek? Do young Poles have a stryj and a wujek or just two wujeks?

I’m starting to worry about the stryj’s in Poland.

I have this image of the last group of Polish stryjow who are hiding in the wilderness of the Bieszczady mountains. Living on berries and mushrooms, they cling to survival away from civilisation that has forgotten them. Will they survive?

Maybe they’ll soon go the way of the paszenog, the last of whom probably passed away in Świętokrzyskie mountains in 19th century. 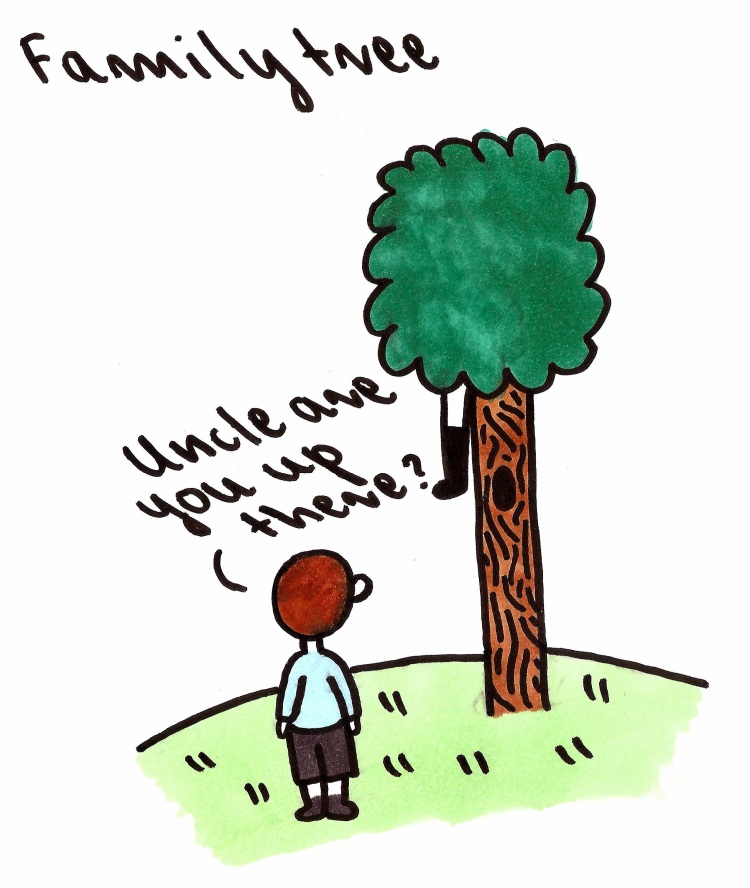 The prefix grand- is a convenient shortcut. To describe a relationship two up or down in the family tree, we just add the prefix grand: grandfather, granddaughter etc, but Polish has separate words for all of these people – dziadek, babcia, wnuk, wnuczka.

Linguistically, the Polish family tree is much more bushy than the English one. But is the tree being trimmed?

Besides the above, I also have other questions and thoughts about Polish families, just little things that puzzle me:

And that’s the challenge facing a language learner – you’re not learning a static thing. A language is always in the process of evolution. When a word isn’t in the dictionary, you’ve got no idea if it’s because the word is too old or because it’s too new.

And then there are other problems…

And if he even exists!

7 thoughts on “The Family Tree”