Idioms can be confusing, especially if you understand the words literally. Often I jump to conclusions about what a Polish idiom means and end up getting it completely wrong.

The worst thing is… I tend to remember the wrong meaning more vividly than the actual one.

So here’s a small sample of Polish idioms I’ve misunderstood – all connected with food:

This is translated as ‘to get into hot water‘ and I like it because it’s so Polish. In the UK, we don’t have kompot and plums aren’t a popular fruit, so to understand this idiom you need to come to Poland and take a look at a jug of kompot. 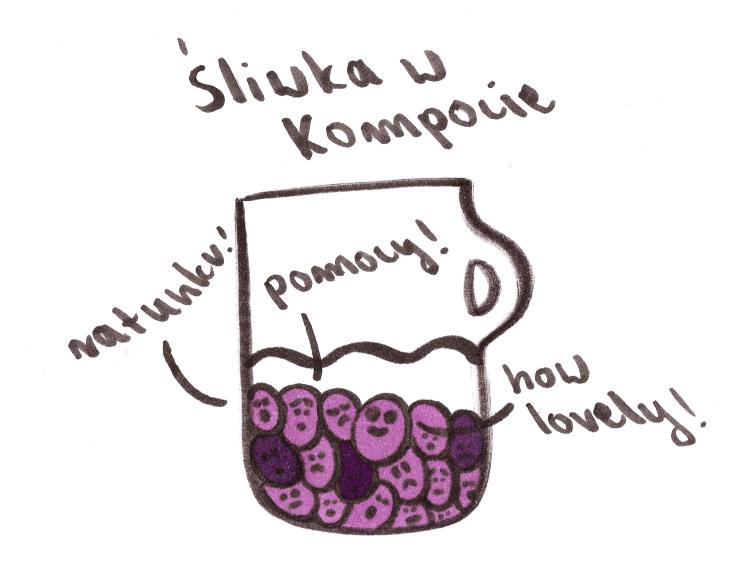 Do the plums in a kompot jug look like they are in trouble? When I first came across this idiom I assumed, incorrectly, that it meant to be in a comfortable, familiar situation. Shouldn’t plums feel at home in a jug of kompot? After all, the plums are with friends! What’s more, I don’t think a plum in kompot is in that much danger. A lot of the fruit gets left behind once the kompot is drunk. I’d rather be a plum in kompot than a plum in jam or in bigos.

Literally, this means ‘as tripe with oil‘. I had been offered flaki (tripe) many times in Poland (which I politely refused) before I came across this idiom. So I associated flaki with something very ugly…even a little exotic…and frankly disgusting.

So when I came across the idiom, I assumed it meant either disgusting or ugly. In English we have an expression that something looks like a ‘dog’s dinner‘, meaning that it’s a mess or really horrible to look at. I figured flaki z olejem meant the same.

I was surprised when I later saw the idiom in its full version ‘nudny jak flaki z olejem‘ which is best translated by the English idiom: ‘dull as ditch water’.

Now I feel sorry for all those Poles who had to eat tripe for every meal so that it became the definition of boredom!

I first heard this idiom when listening to a shanty in the port of Sztynort in Mazury. Maybe it was the context that fooled me because the shanty was about a sailor who survived a storm, reached Sztynort and ate a bread roll with butter. So I assumed its meaning was connected to safety or stability. You know, the kind of thing a fireman would say after it turns out that there’s no bomb in the building. ‘It’s okay, just a false alarm, everything is safe and we can all go home and eat a bread roll with butter‘.

Of course, bułka z masłem actually means that something is ‘easy/simple‘. I guess it’s pretty straightforward to spread butter on a roll, but it’s not so easy to understand why it was included in that shanty.

…except both are a bit more posh than the Polish bułka.

The Polish language is full of great food idioms. Indeed, you could eat a three-course meal consisting of idiomatic foods only:

Client: What do you recommend?

Waiter: Well for a starter, I recommend flaki z olejem.

Client: No, that’s a bit boring. Anything else?

Client: Barszcz is fine, but I’ll just have one grzyb..save some room for desert.

Waiter: As you wish. For the main course, we have some niezły bigos.

Client: Perfect, I’ll have the bigos. Can you serve it with bread and butter?

Client: I’d prefer bread if you have it.

Waiter: And for desert, the icing on the cake, wisienka na torcie.

Waiter: Anything to drink?

Waiter: Certainly…and I assure you that no plums were harmed in the making of the kompot.

7 thoughts on “Idioms for Dinner”