Idioms are mysterious…especially those in a foreign language. Why do they have this particular meaning? Where did they come from? Do people really use them?

In a way, idioms are like internet memes. At some point in history, someone created an expression that ‘went viral’ and became part of the language.

So I’ve decided to write some posts about my favourite Polish idioms – organized by category – to begin with…cats!

I first came across this idiom at work. Together with a colleague we were running a series of training sessions. After the first session had finished and the participants were leaving the room, my colleague said ‘pierwsze koty za płoty‘.

I could see that she was referring to the group of participants that were leaving the conference room. ‘Ah-hah,’ I thought, ‘we’re chasing the cats out of our garden. I wonder why? Maybe the cats were doing their business in the flower beds and we wanted to keep them away from the roses?” I assumed the idiom meant ‘to get rid of unwanted visitors’ like when it’s late and you want the party guests to leave so you can go to bed.

I later learned that the idiom actually means to complete the first step in a series of challenging tasks. And actually, in English we have a similar expression to describe a difficult task: it’s like herding cats.

In English we have an idiom with the exact same meaning: ‘to buy a pig in a poke‘ (a poke is a bag or sack).

Despite using different animals, these two idioms are related. They both refer to a trick played in the middle ages in which a seller would sell what they claimed was a pig in a sack, but it was actually a cat. The buyer, if they didn’t check the contents first, would buy a cat, which is worth a lot less than a pig.

Incidentally, in English, we have another idiom – to let the cat out of the bag – which means to reveal hidden information / plans, and is directly related to the same trick. If you open the bag, reveal the cat, then you have exposed the trick. Curiously, this second cat idiom doesn’t seem to exist in Polish. Perhaps in Poland there’s better customer service and you simply return the kot and get a refund?

I can visualise most idioms and imagine them in a scene (cats, fences, bags etc), but I just can’t picture this one.

I came across it in a comment posted under an interview with a politician. The commentator claimed that the politician had turned the cat around by its tail.

I checked the dictionary and discovered what it meant (twist everything around), but I couldn’t visualise how you would do it? Is the cat facing you or the listener? Do you turn the cat around sideways or flip it over like a hamburger? And how to avoid getting scratched?

When taking our cat to the vet, I struggle to get it into a cat carrier. How skillful do you need to be to turn the cat by its tail? Perhaps there is a YouTube video with ‘how to’ instructions?

I can understand how the first two idioms became part of the Polish language – they make sense – but this one? If it meant ‘doing something impossible‘ or ‘perform a miracle‘, then I could understand. But it describes a skill that someone can achieve. Wow!

According to Katarzyna Mosiołek-Kłosińska*, there are 32 Polish idioms about cats and most of them portray cats as difficult or devious. Fortunately, the modern world appreciates cats much more – there are literally millions of cat pictures, videos and memes online. Indeed, a scientific study found that people who watch cat videos online feel more energetic and positive. 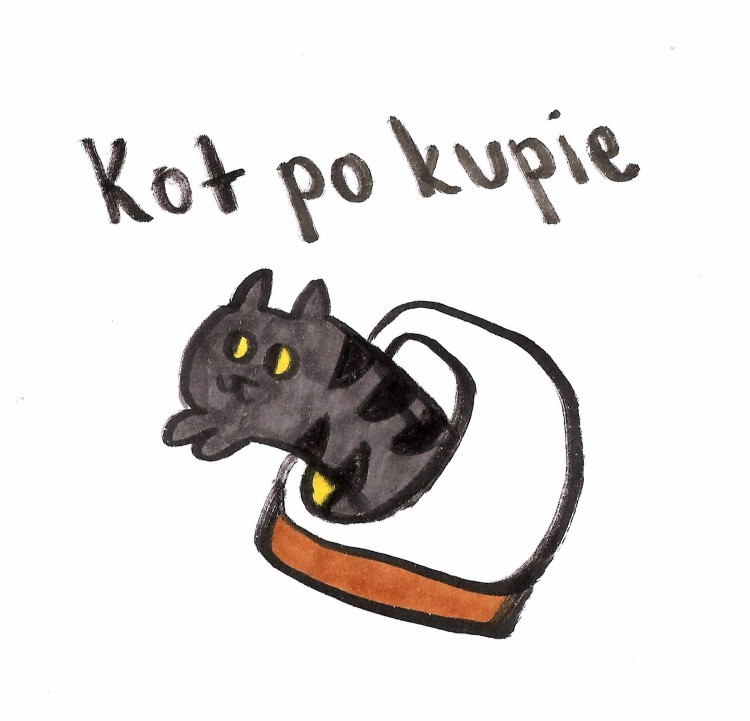 Having two cats ourselves, my wife and I have created our own Polish cat idiom. After visiting the cat litter, our cats get a sudden burst of energy or joy and sprint through the apartment at top speed. Hence our proposal for a new cat idiom:

Will it become part of the Polish language? Probably not. I’m sure there were millions of failed idioms that didn’t catch on and died. But it’s worth trying.