John Cleese once said that if a British person could choose between being called a bad lover or being called someone without a sense of humour, they’d much rather have a reputation as a bad lover. That tells you all you need to know about the importance of humour in the UK.

I lived in Germany for a couple of years, and one of things I missed was British comedy. The German sense of humour just didn’t do it for me. Indeed, I once read an anecdote about a Brit and a German watching a Benny Hill sketch. In the scene, Benny played a street sweeper. Once he had swept the dirt into one big pile, he looked around to check no-one was watching, then lifted the pavement and swept all the dirt underneath. The Brit laughed, but the German didn’t.

‘Don’t you find that funny?’ the Brit asked.

‘No,’ replied the German, ‘in Germany you can’t lift up pavements like that.’

So I moved to Poland.

I was curious whether the Poles had a vibrant sense of humour. Did they appreciate humour in the same way as the Brits? Did they get Monty Python? On my first day in Poland I stood on the edge of a loose paving stone. Suddenly a blast of muddy brown rain water shot up my leg. Well, I thought, at least you can lift up the pavements in Poland!

When I arrived, I didn’t speak a single word of Polish. So besides physical humour, I wasn’t able to tell whether Poles were funny. As a language learner, it takes years and years to reach a level at which you can appreciate even a fraction of the jokes in a foreign language, and linguistic humour is especially opaque. That said, humour and jokes were actually an important part of the language learning process.

Here are three Polish words that I’ve learned because I didn’t understand a joke.

I remember sitting with a group of Poles as they were discussing the fact that one of them had just rented an apartment to a rather untrustworthy foreigner. Spoko, one of them said, on nie wie, co to jest lombard. The others laughed nervously and a little too long. Oh, that joke hit a nerve, I thought… but what’s a lombard? I knew the Lombards as an ancient tribe who had long beards and eventually settled in what is now Italy. Why was it a good thing that this particular foreigner didn’t know any members of a hairy tribe from the Dark Ages? What on earth could the word lombard mean in Polish? Not wanting to interrupt the flow of the conversation, I didn’t ask, but continued to ponder. Perhaps lombard meant ‘barber’ in Polish and they were making a joke about his personal hygiene?

A few months later, while walking down a street in Kraków, I saw a man coming out of a shop. He was carrying a chain saw, which he turned on and started making imaginary cuts in the air. Crossing the road to avoid him, I noticed that he had just come out of a shop called ‘Lombard’. I had a light bulb moment. A lombard is a pawn shop. That guy is checking whether the chain saw works properly before he buys it! Yes, I thought, thank god that foreigner didn’t know what was a lombard was. He would have pawned all the furniture… or worse, he might have a swapped it for a chain saw!

There are lots of different forms of humour – sarcasm, irony, satire, word play, physical humour, self-deprecating humour, ridicule – and different cultures prefer certain types. So coming to Poland, I didn’t take it for granted that humour would be the same as in the UK. Indeed, I had to learn from experience whether Poles used sarcasm, irony and ridicule.

After being in Poland for about a year, my girlfriend and I were invited to one of her friends’ wedding. Before the event I was invited to the couple’s apartment to get to know them. It turned out that they also wanted to check whether it was safe to invite a foreigner to a Polish village wedding, i.e. could I handle the vodka?

After consuming a large number of shots, I got rather ill and had to be taken home in a taxi. The next day (or perhaps it was the one after), the couple phoned my girlfriend to check that I was still alive. I asked her how the call went and whether they were disappointed by my poor performance.

No, no, she consoled me, ‘they said you were a dobry zawodnik.

Really? But I fell asleep in their bathroom!

What I was really thinking was ‘do Poles do sarcasm?’. Are they saying the opposite of what they think for comic effect? Or perhaps they were just trying to be polite to help me save face?

To this day, I still don’t know. But that’s how I learned the Polish word zawodnik… and, despite all the evidence to the contrary, I like to believe that they weren’t being sarcastic 😉

In the UK, one of the most common forms of humour is self-deprecating humour. Because we don’t want to appear too arrogant or serious, we tend to make jokes about ourselves, especially about our own abilities. When a British person says, ‘I can barely boil an egg’, they probably have at least one star from Michelin.

Interestingly this is not a form of humour that Poles use very often… but there is one exception.

While working as a language teacher, I had a student who struggled to memorize new vocabulary. During one lesson, while we were revising some new language from the previous lesson, she failed to recall a single word. Ale mam sklerozę, she said in Polish. Taking her literally, I assumed she was revealing that she had a serious disease. In English, the term ‘sclerosis’ is used in a number of disorders, most of which are rather serious. I reduced the number of new words we covered and gave her less homework. Must be tough to learn a foreign language with such a disease, I worried.

After the third or fourth time I heard a Pole saying mam sklerozę, I started to worry that there was an epidemic in the country. Perhaps it was genetic?

Eventually, I asked a student ‘How long have you had sclerosis?’

‘No, no… it just an expression,’ she said. ‘I don’t really have sclerosis, just a bad memory!’

And that’s how I learned one of the few Polish examples of self-deprecating humour. While in English, we might say that ‘I have a memory like Swiss cheese’, in Polish they take the depreciation one step further and diagnose themselves with a major disease! 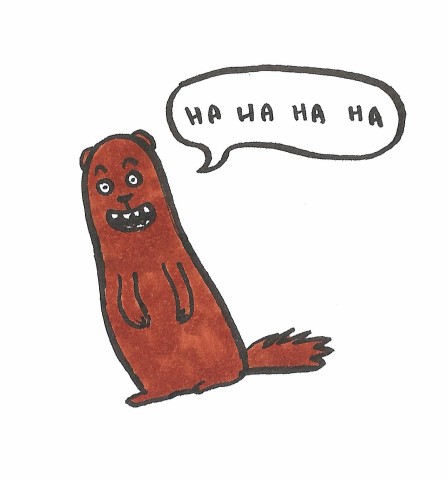 Despite learning a lot of Polish from various types of humour, I still miss so much. Sometimes I just pretend I’ve understood and laugh anyway. Polish has a great expression for this: śmiać się jak głupi do sera (lit. laugh like a fool at cheese) which means to laugh for no reason. It fits my experience a lot of the time. If someone cracks a joke at the end of a dinner party which everyone gets but me, rather than sit there looking serious, I just laugh at the cheese.

When Poles tell jokes, I’d say I laugh at the cheese around 85% of the time. Even when I understand the joke on a literal level, I often don’t understand the double meaning that makes it funny.

I tried learning Polish vocabulary connected to humour, but it didn’t help at all. I memorized the word dowcip (joke) because it is an anagram of ‘cowdip’, and made me think of cows being disinfected. Żart (joke), on the other hand, sounded like the English word ‘fart’ and was easy to associate with lavatory humour. The verb chichotać (to hehee) is a wonderful onomatopoetic word. The only trouble is that I always mix up the vowels and usually end up saying chachotać or chichachać!

That usually gets a laugh.

So do Poles have a good sense of humour? Does Polish humour meet my high expectations? Undoubtedly yes.

There’s a Polish expression obśmiać się jak norka (laugh like a mink). I’ve no idea why a mink is the reference point for laughter, but perhaps it should be used as a sales slogan for language schools.