Is Poland a big country or a small one? Sounds like a simple question, but it isn’t.

The first day I arrived in Poland, while traveling by taxi from the airport to the centre of Warsaw, there was one thing that really captured my attention in this new, alien country. It wasn’t the people nor the buildings, but some of the cars. They were so absurdly small that I couldn’t believe a human being could fit inside. ‘That’s a Maluch,’ explained the person who had picked me up at the airport. ‘It means ‘a little one’.

It turned out that my flat was ‘a little one’ as well.

The apartment was around 28 square metres and consisted of one room, half a kitchen and a tiny bathroom. There was one narrow sofa bed that was a sofa during the day and a bed at night, and also doubled up as a container for the bedding. Covering one entire wall of the living room was a line of cupboards, shelves and drawers, some functional, some ornamental, which was packed full of possessions left by the landlord. The washing machine wasn’t in the kitchen. Instead, despite being tiny, it took up half the space in the bathroom, and only had enough capacity for one set of clothes to be washed at a time. The TV screen was the size of a toaster and mostly showed ski jumping competitions, which were won by a small Polish guy called ‘Małysz‘.

Unsurprisingly, many of the first words I learned in Polish described small things – mały, wąski, krótki – or were the names of space-saving items of furniture and storage solutions – meblościanka (wall unit), wersalka (sofa bed), pawlacz (cubbyhole) and piwnica (basement). Indeed, one of the first verbs I learned was rozłożyć łozko (set up the bed) though I learned it in the context of nie mogę rozłożyć łóżka (I can’t set up the bed). There’s a knack to getting one half of a folding sofa bed to click into place so that it collapses into the bed position. I just couldn’t work out how to do it and spent the first few nights sleeping on the narrow sofa rather than the full bed. I was too embarrassed to ask for help in case people got the wrong idea. Can you come round to my place and show me how to set up the sofa bed? Sounds way too suggestive! 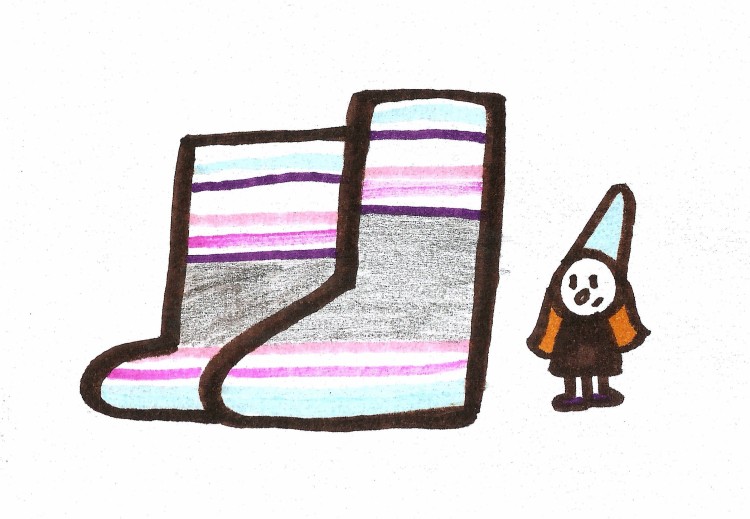 Like Gulliver on his arrival in Lilliput, I felt like a giant in a world designed for dwarfs. And I started to wonder whether communist architects had made some sort of miscalculation in their plans that caused them to assume that Poles were only 1.5m tall.

First impressions can be deceptive, but at first, Poland felt like a small country.

In the book Gulliver’s Travels, Gulliver escapes from Lilliput, and ends up in a land of giants called Brobdingnag. Curiously, my first month in Poland seemed to retrace Gulliver’s journey when I spent a long weekend in Southern Poland.

I was immediately struck by the difference in scale. The houses had five stories, the fir trees were huge and the Tatra mountains looked like the Alps. In Zakopane I didn’t learn words for small, compact things, but for big, expansive ones: góra, góral, wielki. The hiking routes were długie (long) and the prices, like the mountains, were wysokie (high). The highlanders, the Górals, also seemed to have a big approach to life as well – large, outgoing people with loud, booming voices. They seem to have so much confidence, striding around in those fury sweaters and sheepskin trousers.

I went rafting on the Dunajec river and as we passed beneath the Pieniny Mountains, one of the passengers asked a Góral who was steering the boat what he did during the off-season when there were no tourists. Fortunately, a Polish friend was on hand to translate his reply.

Pointing at the three peaks above us, the Góral said in a melodic voice, ‘we rearrange the mountains to give the tourists a different view when they come back the following season.’

If Nietzsche went looking for his superman in Poland, I’d recommend he start in a karczma in Podhale!

Riding the train back to Warsaw from Zakopane, I leafed through a guidebook to Poland and was surprised to notice that the ‘land of giants’ was called Małopolska.

‘Isn’t it ironic that the region with all the big stuff is called ‘little Poland?‘ I asked a Polish friend.

‘No,’ she replied. ‘Because there’s a region called Wielkopolska too and there’s no mountains there.’

I started to wonder whether Poland was Jonathan Swift’s inspiration for Gulliver’s Travels. Perhaps he toured Europe in his youth and was struck by the contrast of big things and little things in Poland. Of course, when Swift was alive in the 17th century, Poland was bigger than it is now… and in a different location… and the mountains have been rearranged by the Górals many times since then…

So is Poland a big country or a small one?