I have one inhibition when speaking Polish.

It’s not that I’m concerned with making grammar mistakes. I don’t care if I get vocabulary mixed up. And it’s not about using the right declination.

The thing that I have a big inhibition about…is diminutives!

I just don’t feel comfortable speaking in a way that makes things small and cute.

The Polish language has a lot of tricky grammar, but one, often overlooked, challenge for learners is grasping diminutives. By saying kawka instead of kawa (coffee) or piesek instead of pies (dog), Poles have special ways of making things sound small, cute and fluffy.

There’s a website called Cute Overload – it’s just pictures of cats, dogs and other sweet animals. If you need a daily fix, this is the place to go. And sometimes that’s what Polish sounds like…cute overload!

Take for example the word kot. Now I do think that cats are pretty…but does Polish really need 15 words to talk about a cute cat? 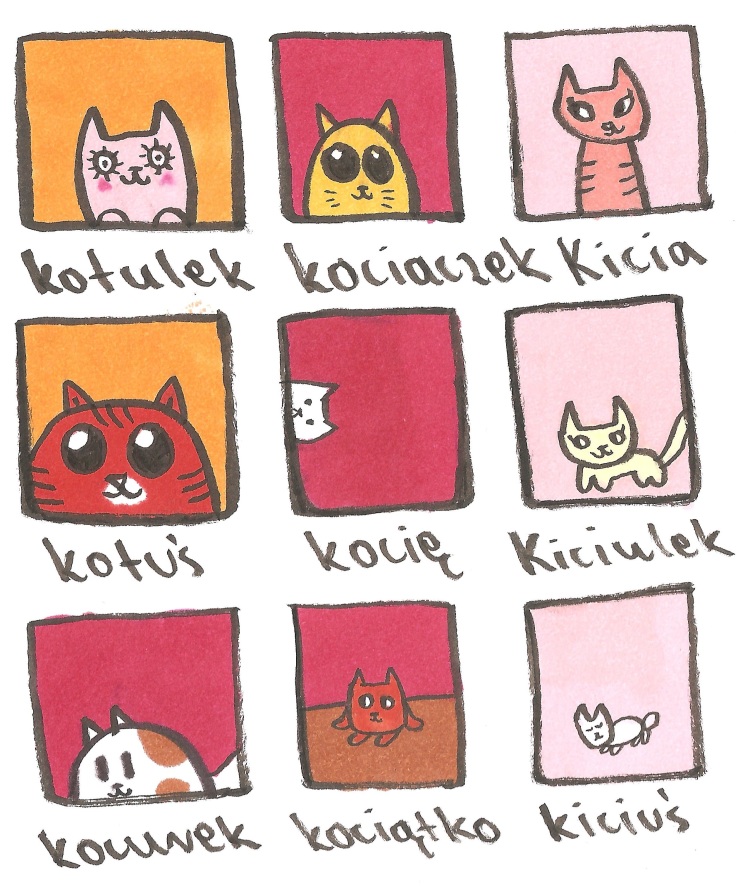 In English we survive with just two cutesy words for cat, namely kitty and pussycat, but Poles either really like cats or no one is heartless enough to trim the dictionary.

I ask Polish friends to explain all of this, but it rarely helps:

Me: What’s the difference between kot, kocurek and kiciuś?

Pole: Well, a kocurek is a small, cute and fluffy cat.

There are so many words for cat that sometimes I get confused and think any word that starts with a ‘k’ is another kitty word. Kościuszko…is that the guy who lead an uprising in the 18th century or is it just another word for a pretty cat?

Polish kids learn all this language during the first few years of their lives. Foreigners, who try to learn Polish grammatical rules, have a harder time. Indeed, if you try and organize all the cat words into a sensible order, you end up with a table that even Mendeleev would struggle to understand: 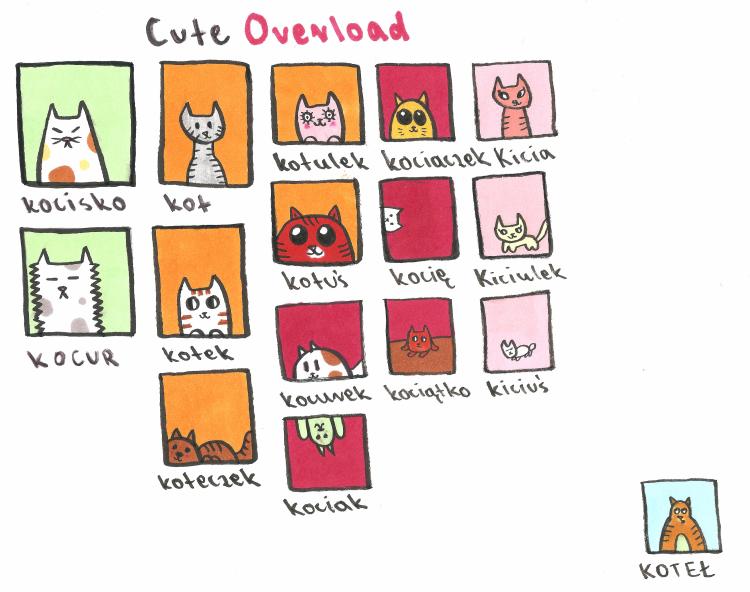 And as a result of internet memes, there’s even a new addition: koteł. Will the list ever stop growing?

So coming back to my inhibitions, I’m actually okay using diminutives when referring to kittens, puppies and froggies, but I have a harder time when it comes to non-living things – kawka, herbatka, łyżeczka, kanapeczka (coffee, tea, spoon, sandwich). It just feels silly to make an inanimate object all small and fluffy. If I just want milk in my coffee, do I need to say that I want it z mleczkiem (with a wee dash of milky-wilky)?

One consequence of this is that I’ve been told that I’m too serious when speaking Polish. Maybe I sound like a cyborg, speaking like a robot in a serious, neutral tone.

So anyway, I have lots of doubts and questions about these Polish diminutives:

And finally, one last question, why does the Polish language need 15 words to describe a cute cat?